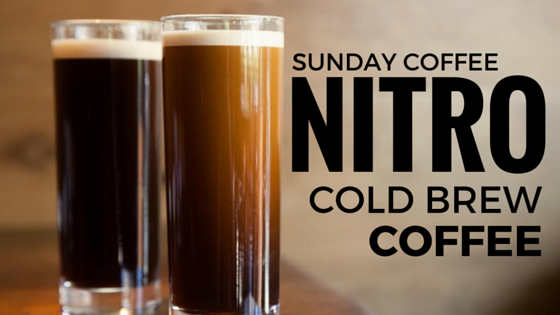 One of the hottest trends in coffee this year is Nitro Coffee. If you’ve been living under a rock and don’t know about Nitro, it’s cold brew coffee with bubbles!! Oh, and it’s poured from a tap, just like your favorite craft beer.

When nitrogen is infused into cold brew coffee, the bubbles give it a rich and creamy texture. It’s delicious! Coffee shops all across the United States are installing draft coffee equipment and serving cold brew nitro coffee from a stout faucet. Coffee lovers approve, as lines circle the block just to get a taste.

In case you’re confused, cold brew is not “iced coffee” but refers rather, to the process used for brewing the coffee. With cold brew, time replaces heat in the brewing process, resulting in a coffee concentrate with tons of flavor. Without heat during brewing, the acids in the coffee bean are not released,  allowing for a smooth and sweet coffee experience.

Want to know more about making cold brew coffee? The guys over at Keg Outlet have created an awesome e-book

that covers all the steps. Whether you’re making cold brew for the first time at home or you’re a business thinking about adding cold brew coffee to your menu, this Guide to Cold Brewed Coffee & Serving Coffee on Draft is the place to start. It’s a step by step guide for making cold brew coffee, the equipment needed for large-scale production, coffee to water ratios and what you need to serve coffee on draft. The best part is, it’s FREE!

Brendan and Cary Hanson founded KegOutlet.com in 2012 to provide a “one-stop shop” for homebrewers on a budget. When customers started asking about coffee on tap, they decided to add cold brew coffee supplies to the business. Brendan was no stranger to cold brew coffee, he has been cold brewing for over 10 years. Even better, he stores his cold brew in a 5-gallon keg and fills his cup each morning directly from his kegorator.

I tell my beer customers there’s nothing better than to be able to use your kegorator on a Monday morning for coffee.

From Cold Brew to Nitro Coffee

Cold brew coffee poured from the tap is great, but why not make it better! This past year, the Keg Outlet brothers started offering nitro coffee systems for sale. So, I asked Brendan to walk me through the process of adding nitrogen to coffee.

Once you get the cold brew coffee into a keg, you’re going to hook it up to a nitrogen tank. You can either force it, by agitating the gas while you’re pouring into the keg, or hook up to a tank at 40 – 50 psi. After you add the nitrogen, it will need to rest for 24 – 48 hours while the nitrogen permeates the coffee.

When you’re ready to serve, instead of using a standard beer faucet, hook the keg to a stout faucet like you pour Guinness from. There is a restrictor plate in the stout faucet that has 5 tiny holes. When the nitro infused coffee pours through the holes, it agitates the gas producing a rich, creamy frothy head. With nitro coffee you get a smooth creaminess that makes a person skip the milk and creamers. It’s maybe more of a sipping drink, it’s good stuff.

Want to wake up every morning to a creamy nitro cold brew? Here’s a great “How To” video on how to set up a Kegerator of your own to serve Nitro Coffee.

For coffee shops, cafes and bars, introducing Nitro Coffee has resulted in a welcomed economic boost! Sales are up as long lines with eager customers await a taste of the smooth, silky cup-of-Joe.

According to Brendan, adding a cold brew and nitro coffee system to your bar can be very economical. The basics of a nitro coffee system will run you between $1,000 to $1,500 (keg, tank, beverage lines, etc.), more if you want a nitro tap and cold brew tap combo. Brendan states, “shops doing good business can go through multiple kegs in a day.” With a 12 oz cup running between $3.50 to $5.00, the system pays or itself rather quickly.

Although nitro coffee makes up a small percentage of a coffee shops daily sales, the trend continues to grow as curious coffee lovers give it a try and nitro converts order their second cup! Personally, Nitro Coffee is a trend that I hope is here to stay.

A Great Place To Learn More About Nitro Coffee

The guys over at Keg Outlet have recently begun a podcast and forum for cold brew & nitro coffee called Drips & Draughts. It’s a great opportunity to learn more about nitro coffee directly from home brewers, professional roasters and coffee shop owners all across the U.S.

They offer several options for enjoying the podcast, including iTunes, Google Play Music, and Stitcher.