I got to meet up with Pauline Knighton, the new President of the newly formed Craft Beverage women’s trade group, called Fermenta.

Fermenta’s goal is to bring together the talented women of Craft Beverage in the state of Michigan. They’re brewing their own beer, going to be hosting their own events, and it sounds like a lot of fun.

Pauline & I met via Hangout this week, and it was fun to hear about her career, the formation of Fermenta, and the group’s goals. The video transcription is below.

Cindy Molchany:    Hi everyone. I’m Cindy Molchany with Craft Beverage Jobs. I want to welcome you to this special Google Hangout on Air.

I have Pauline Knighton here with me. Pauline is the president of Fermenta, which is a new woman’s trade group focusing on craft beverage in Michigan.

I found Fermenta via a Google Alert. I saw a press release that they launched last week at a beer festival up in Michigan. Fermenta is just getting off the ground, and they’ve got a great mission. They’re committed to diversity, camaraderie, networking and education within the craft beverage industry. This sounds right up the Craft Beverage Jobs’ alley. We are committed to very much the same things and promoting the category of craft beverage and getting people, and especially women, jobs in this great field.

I want to welcome, Pauline. Thank you for joining us.

Pauline Knighton:    Thank you for having me, Cindy.

Cindy Molchany:    Will you tell us a little bit about yourself, what you do, how you got into craft beer, and how you became the President of Fermenta? A loaded question, I know.

Pauline Knighton:    Currently, I work for Short’s Brewing Company, which is a Michigan-only brewery. We are the third largest microbrewery in the state, right behind familiar breweries like Bell’s and Founders.

We just celebrated our 10th anniversary. I started working there about a year ago in the marketing department. I’ve been with the company for almost a year and actually am in the middle of transitioning to a new position, where I will be a what we call a Beer Liberator Field Representative for a region within Michigan. I’ll watch over accounts that carry our products and do beer dinners and have tap takeovers and all that fun stuff.

I got into craft beer pretty much also about a year ago, when I was graduating college and figuring out what I wanted to do. I knew I loved the idea of the craft beverage industry and being very hands-on and making a product that means something to not only the creator, but also the people that either consume it or use it. 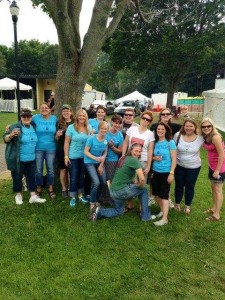 Craft beer was something that I just slowly became interested in. It helped that I grew up going to Short’s. My dad was big into craft beer. That’s how I was introduced, just going up to Northern Michigan on vacations and always stopping at Short’s. It was just, and it still is, a truly unbelievable atmosphere. Everyone who works there is knowledgeable and kind.

I loved the product, so I said that’s the industry that I want to get a job in. Something popped up, and it all worked out for me. I couldn’t be happier in this industry right now and definitely know it’s a place that I want to stay.

In the past year, I’ve had a very positive experience in this industry not only just as a person, but also as a woman. It’s also been interesting because it is still more of a male-dominated industry, but I also believe it’s an industry that’s very respectful and welcoming to women. 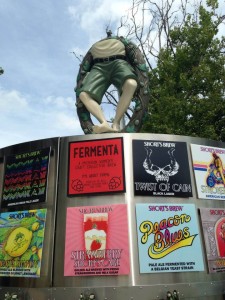 To me this is an industry that is growing and should continue to grow. The female demographic is also growing. The goal is to have resources for women so that they feel comfortable going from just being interested to getting into home brewing or home brewer to actually wanting to take that jump of getting into the professional industry – knowing that’s there are resources.

As I just said, I do believe that all the men that I have at least worked with … I know people have different stories. Being in this industry has been very positive, but yet there are majority males. Sometimes it is nice feeling like you have a mentor or a network, people who can relate to you. That’s always a good way and a comfortable way of jumping into something new.

I was introduced to a woman named Stacy Roth, who is one of the brewers at Griffin Claw, which is also a brewery in Metro Detroit. Actually, one of my co-workers introduced us because we were at a Michigan Brewers Guild conference and said “Pauline, I would like you to meet Stacy, a really strong woman in this industry.”

We started talking and I said “I just feel like with Michigan being such a great craft beer state, we could totally do something where we do a collaboration beer with women across the state or something fun.” She said “Well, for many years now, I’ve really wanted to put together a woman’s group for Michigan.”

We brought those 2 ideas together, and this was really just this past winter, so just a couple of months ago. We started talking about it. We started bringing in other women that we were friends with in the industry. It slowly just started taking off.

We decided that craft beer is a very strong part of the state, but there’s also things like cider and mead and the spirits industry and wine is already very big in Michigan. Why not create a trade group where all of those industries can come together, they’re able to learn from each other, which ideally grows the whole state of Michigan and the whole craft industry?

Cindy Molchany:    Very cool. That sounds exciting. How many members do you have now? Do you have members yet?

Pauline Knighton:    Yes and no. We’re in the phase of finishing our paperwork to become actually a non-profit. We are officially incorporated, so very excited about that. I’ve been communicating with about 70 women at the moment. Within just a matter of weeks of us putting out that press release and really just talking to each other every day …

Between Facebook and emails, I get inquiries from women who are interested. Our goal is that by August 24 we have a big launch event at a tap room in Midland, Michigan. It’s our center point for people to meet. We’re going to be able to offer membership.

We’re going to do a 2-tier membership. One being a professional membership, in the sense that you receive some type of income from the industry. The other membership will be more of an associate membership, where you are interested, but you aren’t earning money in that.

There’s really not a big difference between the 2, but we just decided to … When we started, it was going to be based on people being professionals in the industry, but we had so many women who were interested in joining and had ju 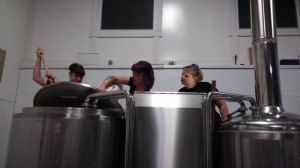 st as much knowledge, if not more, than some of us who are professionals in the industry. We couldn’t let those resources go.

We have 2 tiers and really the only difference is to be able to hold a board position, you have to be a professional in the industry. There’s some voting differences. We will hopefully have membership in a couple of weeks.

Cindy Molchany:    Good for you guys. Do you know of any other women’s trade groups in the craft beer, or craft beverage in general, industry?

Pauline Knighton:    There are a decent number of female-oriented groups in Michigan that are focused on women getting together, not necessarily professionally in the industry, to enjoy craft beer and be able to talk about it and feel like they can openly talk to each other and hang out and have a good time.

Draft Divas is one that’s really big in the Metro Detroit area. Then there’s also the Pink Boots Society. They are an international organization for women in craft beer. At first, we were very seriously considering being a chapter of the Pink Boots because they do some wonderful things and a lot of education for women.

Because they’re focused on craft beer and we decided to open it up to other craft beverages, we weren’t able to necessarily become a chapter. However, we would love to work with all these different established groups to do events and just help everyone grow.

Cindy Molchany:    Great. That leads me to my last question. What can we expect from Fermenta? What do you guys have in the pipeline or in concept? What can we learn?

Pauline Knighton:    One of the biggest things is definitely educational behind the foundation of Fermenta. Ideally, we will have monthly events that will take place in different parts of the state, whether it’s at someone’s brewery or a tap room or a distillery, and have educational seminars taught by people who are professionals in a specific niche of an industry.

It might be anywhere from learning about yeast strains to glassware to fermentation, learning how to make mead. A lot of the women are interested in the hands-on activities of it, but haven’t even jumped into that yet.

Lots of events. We already have a lot of different establishments throughout Michigan, craft beer bars and other bars that are interested in jumping onboard. Lots of educational events, events that aren’t just open to women, that are open to men and women. That’s something we’re very interested in. It’s about conversation between the two or else we’re never going to move forward as a group.

Finally, we’ll definitely have some more collaboration beers. We’re hoping at least once a year, if not twice a year, at some of the really big Michigan festivals, we will have fermented beers where people can go around and know that the beer they’re drinking was made in collaboration by women across the state.

Cindy Molchany:    Great. That sounds really exciting. Congratulations. It sounds like you’ve laid a great groundwork and all good things ahead.

Pauline Knighton:    Thank you very much.

Cindy Molchany:    Thanks for joining us.