When I think back to a year ago, it’s almost hard to comprehend how far Craft Beverage Jobs has come; I certainly wasn’t thinking in that moment what a year ahead would look like.

I launched Craft Beverage Jobs on April 1st, 2014 as my first effort at creating an online business around an industry that I’ve been involved in for 10 years. 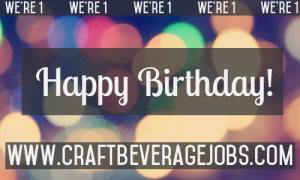 If you know me at all, then the concept of Craft Beverage Jobs was an easy leap. I am passionate about the beverage industry, I’ve always helped those around me with their career paths (resumé building, job searches, etc), and I have online marketing experience.

I will admit to you now that I launched Craft Beverage Jobs rather naively. On April 1st I made the site live, and with a little nudge via Social Media, I let the word out. My attitude was really “let’s see what happens with this“.

Two Weeks In, I Almost Quit

Response was positive when I launched. There was neither a lack of interest or an inundation of traffic. It was going as well as could be expected. The reason I almost quit was because I got overwhelmed with the expectations I had set for myself and for the site; the gravity of just how much was involved to produce regular content, grow a subscriber list, do employer outreach, etc almost got the best of me, and I couldn’t see a way (while working full-time) that I could do it all.

With the same “let’s see what happens with this” attitude, I decided to reach out to a contact on Google+ about two weeks into April with the hopes to find someone who would want to join me and help me grow Craft Beverage Jobs.

I met my friend Bradford via a Hangout on Air we both did for our day jobs at the time. I immediately liked his can-do attitude and recognized someone who knew how to get stuff done, who knew how to build community, and who would be fun to work with. I was thrilled when Bradford agreed to come on board as partners in Craft Beverage Jobs.

So since mid April 2014, Bradford and I set out a course “to see what happens” with Craft Beverage Jobs. Together we have grown the site from just a few available active jobs to one with dozens of jobs at any one time; we’ve gone from just a few daily visitors to nearly 10,000 visitors per month; and where we originally had just a few Twitter followers, we now connect with over 6,000 Twitter friends.

When Craft Beverage Jobs began, it almost seemed like we were on our own little island of “craft beverage”. Very few people were using the term, and even fewer seemed to be interested in combining the various beverage categories (craft beer, wine, spirits, cider, coffee, etc) together as one talking point (and certainly not as one job seeking community).

12 months later, and the story is completely different. In large part to the success of some industry events (Craft Beverage Expo being one), the emergence of various “Craft Beverage Trails”, and even legislation (“The Craft Act“), the term “craft beverage” appears to now be an accepted way to categorize and talk about the (small business) beverage industry from.

We recognize that being a part of this movement has been a big part of our success, and it’s nice to think that we have played a small role in moving craft beverage forward.

As we go into our 2nd year, Bradford and I will still carry with us the “let’s see what happens” attitude (I think it’s an official part of our CBJ culture now), but we will be moving forward with a few more concrete goals for growth.

We also may be looking to grow our team. We recently launched an Affiliate Program, and we’re now looking to expand on that with a sort of Ambassador program.