On the low end, an estimated 1% of the (US) population is diagnosed with Celiac disease – an autoimmune condition resulting from a severe intolerance to gluten. When someone suffers from celiac disease, it’s absolutely vital that they avoid gluten at all costs because ingesting even small amounts can be very harmful, if not deadly.

An estimated 6% of the population is “gluten sensitive”. People sensitive to gluten report digestive distress whenever they ingest products that contain gluten.

An even larger percentage of the population opt for a gluten-free lifestyle. These people may not be intolerant or sensitive to gluten per-se (from a health concern point of view), but individuals who are gluten-free report many health benefits from avoiding gluten in their diets.

Without getting too technical and scientific, gluten is a component (protein) found in many grains like wheat, rye, and barley. When you take these grains and turn them into bread, gluten is the magic ingredient that gives the dough its elasticity.

But there is Barley in Beer!

Traditionally, yes. Some cornerstone ingredients in beer are grain-derived (i.e. barley), so there is gluten in a mass majority of beer produced. If you are celiac or live a gluten-free lifestyle, you do not want to consume beer that contains some of these traditional grain ingredients.

Note: there is no gluten present in hops

Are there Gluten-Free Beers?

Yes! And they are delicious!

Instead of traditional grains that contain gluten, brewers of gluten-free beer use alternative ingredients like buckwheat, rice, quinoa, millet and sorghum.

Sorghum – a genus of plants in the grass family, related to sugarcane, and native to Australia. Sorghum is heat and drought tolerant making it an important crop worldwide.

Firstly, it’s imperative that no ingredients that contain gluten make it into a brewery, so the quality control measures at a gluten-free facility are increased 10 fold. 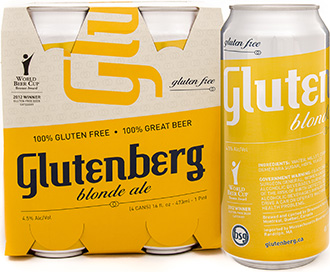 Secondly, there is perception to overcome. Even though we live in a craft beer culture where experimentation is both embraced and celebrated, gluten-free beers have had a barrier to entry. People, whether they admit it to themselves or not, like a certain amount of tradition and style when it comes to the beer that they drink.

Thirdly is quality and taste. Once people are willing to try your product, are they going to like it?

Lucky for Glutenberg – they’ve been able hit each of those milestones head on and are producers of some pretty amazing craft beer.

Glutenberg is 100% gluten-free and comes from Ontario, Canada.

Glutenberg: This Is Who We Are from Glutenberg on Vimeo.

Glutenberg is distributed in the US and is currently looking to hire two Brewery Representatives – one for the Midwest market and one for the East Coast Market.

Take a look at the job description below, and if you’d like to apply, visit the listing to submit your resumé and cover letter.

Glutenberg Brewery has an immediate opening for a Brewery Representative on the East Coast and in the Midwest. The Brewery Representative will work autonomously to focus on developing new accounts and maintaining current accounts within the industry. A high emphasis is placed on increasing the availability and visibility of products in new and existing accounts.