After intense qualifying rounds held around the country, the top coffee professionals from across the nation met in Seattle, Washington. From April 21 – April 24 they battled in the 2017 United States Coffee Championships. After three days of fierce competition at the Washington State Convention Center, the results are in, and the winners are busy preparing for the upcoming world competitions.

The Barista Championships tested the skills of the 36 best baristas in America. In just 15 minutes, each competitor had to prepare an espresso, a milk-based drink, and one signature drink for each of the four sensory judges while under the watchful eyes of two technical judges.

When the last ounce of espresso was gone, Kyle Ramage from Mahlkonig USA came out on top with a score of 639.5. Andre Allen from Onyx Coffee Lab was in second place with 635, and Equator Coffee & Teas’ Talya Strader earned 608.5 points. Samuel Lewontin, Bethany Hargrove, and Josh Taves rounded out the top six finishers. Tim Maestas, Chris Vigilante, and Evan Inatome closed out the top six finishers.

Kyle Ramage will head to Seoul in November to compete in the World Barista Championship.

The manual brewing prowess of 24 of the finest pour-over coffee experts was tested at the United States Brewer’s Cup in three separate services. The Compulsory service determined which expert was able to brew the best cup using the same coffee. The Open service gave competitors the leeway to brew the perfect cup using any coffee of their choosing. In the Serve the Audience service a few lucky spectators were given the opportunity to taste the efforts of the competitors.

Dylan Siemens from Onyx Coffee Lab came away with the win by scoring 89.11 in the final tally by the judges. Less than one point from Siemens was second place finisher Chelsey Walker-Watson from Slate City Roasters who earned 88.23. Jacob White from Bird Rock Coffee Roasters walked away in third place with a score of 87.14. Jessica Rodriguez, Tommy Kim, and Michael Schroeder completed the final six.

Dylan Siemens will represent the U.S. in the  World Brewers Cup held in Budapest this summer. 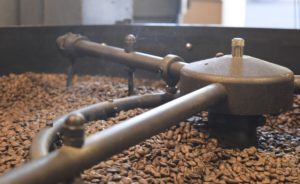 Twelve of the best artisan coffee roasters in America competed at the U.S. Roaster Championship. The competition was held in two stages. In the first stage of the event, the roasters presented the same compulsory coffee, Kenyan Karundu AA, to the judges for a blind taste test. In the second stage, roasters were able to present the coffee of their own choosing to the judges.

Onyx Coffee Lab once again came up with the winner when Mark Michaelson won the competition with a total score of 249.29. Tony Querio from Spyhouse Coffee Roasting Co. tallied a total of 245.49 points. A close third place finish went to Taylor Gresham from Evocation Coffee who earned 245.08 points overall. Tim Maestas, Chris Vigilante, and Evan Inatome filled out the top six competitors.

Coffee experts put their taste buds to the test at the U.S. Cup Taster’s Championship. The top tasters in the U.S. competed in a challenging triangulation of eight different coffee selections. Each competitor was presented with eight sets of three cups of coffee. In each set, two of the coffees were the same, and one was different. The competitors were timed to determine whether or not they could detect which coffee was different.

At the end of the day, Cuevas from Black Oak Roasters walked away in first place with seven correct identifications in 2:38. Samuel Demisse of Keffa Coffee and Anderson Stockdale from Blacksmith were also able to correctly identify seven out of eight coffees. Their times were 3:11 and 4:00, respectively. Aaron Lerner, Aaron macDougall, and Tony Auger topped out the top six finishers.

Congratulations to all of the winners. Good luck to Kyle Ramage and Dylan Siemens at the Internationals.