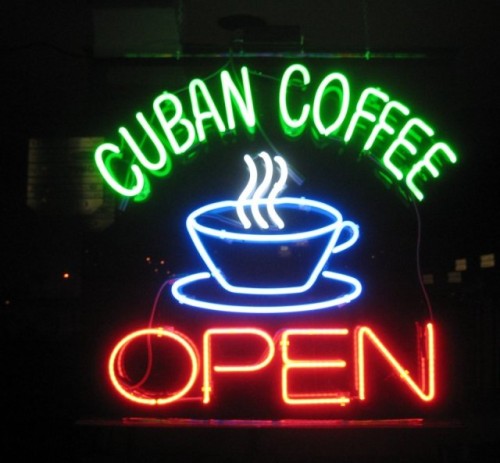 Today, the President of the United States, Barack Obama, and President Raul Castro of Cuba made history with the first official meeting between the two countries in over 50 years.

During the meeting, Mr. Obama did speak to the lifting of the embargo. Mr. Castro responded that lifting the embargo was “the most important obstacle to our economic development and the well-being of the Cuban people.”

Cuban Coffee: A look at the Cuban coffee market and its potential should the U.S. embargo on Cuba be lifted.

With recent headlines highlighting the potential lift of the U.S. embargo on Cuba, we wondered what that could mean for the Cuban coffee industry. So we reached out to the experts on Cuban coffee, The Cuba Mountain Coffee Company based in London, for an interview.

The Cuba Mountain Coffee Co. is a green bean importer of premium Cuban coffee into the U.K. They roast and

In the interview below, I’m joined by Cuba Mountain’s Amanda Cepero, a first generation Cuban-American. Amanda shares her expertise on the history of coffee in Cuba, the Cuban culture, and what steps Cuba will have to take to enter the U.S. coffee market.

The History of United States and Cuba Relations

The troubled relationship between the United States and Cuba started in the 1960’s, when the new government of Fidel Castro began to seize private land, nationalize hundreds of private companies, including U.S. corporations, and place heavy taxes on U.S. exports. The Unites States, under the Eisenhower administration, responded with trade restrictions. Castro answered these restrictions by increasing trade with the Soviet Union. Remember the “cold war”? The strengthened Cuban – Soviet relationship was a source of great concern for the U.S. administration.

Under the newly elected President Kennedy, a permanent embargo was issued February 7, 1962. The embargo called for Cuba to hold free elections, release political prisoners, and guarantee free speech and workers rights to its citizens. With commercial, economic and financial restrictions now in place, the Cuban economy quickly declined under the embargo, having relied heavily on American-made products.

Will The United States Lift The Embargo?

Every year, the subject of lifting the embargo on Cuba is introduced to Congress, but little has been done to pursue real discussions. However, recent developments have anti-embargo supports hopeful.

In 2014, the Obama administration announced plans to normalize relations with Cuba. On April 11, 2015, while attending the Summit of the Americas, President Obama and Cuban President Raul Castro made history with their hour long meeting on U.S. and Cuba relations. The meeting comes on the heels of a bipartisan bill introduced by a number of U.S. Senators in February. The bill proposes the elimination of ‘legal barriers to Americans doing business in Cuba’. Critics of the bill are quick to point out that it does not deal with the human rights and property claims issues, for which the embargo was originally introduced. 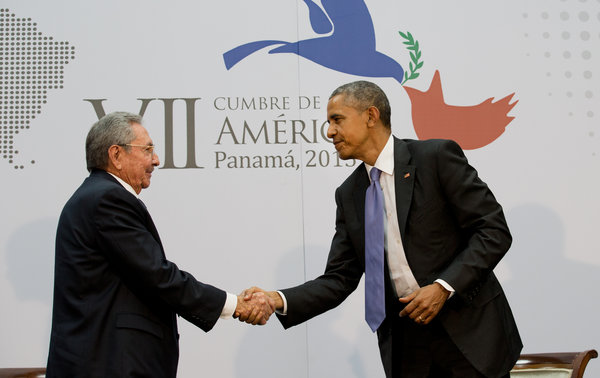 History and Culture Of Cuban Coffee

It may be difficult to imagine today, but at one time Cuba was the world’s largest exporter of coffee. Like its neighboring Latin American coffee exporters, Cuba’s ideal altitude, Caribbean breezes and rich soils produce a premium coffee bean.

Coffee came to Cuba in the early 1800’s from the influence of French merchants who were fleeing the Haitian revolution (1791-1804). As a love for Cuban coffee increased over the following years, more plantations were established to meet the demand of both green beans and roasted products. At the height of the Cuban market in the 1950’s, Cuba was exporting 20,000 tons of coffee worldwide, valued at $21.5 million. With such an economic impact, its easy to see why coffee became an important part of everyday Cuban life.

In my interview with Amanda Cepero, a first generation Cuban American, she compares the Cubans love for coffee to what she has experienced at her current location in London,

Cubans definitely love their coffee. The best way to describe it is to the British and their tea. It’s a staple of life, a very social thing.

Just when Cuban coffee was at its peak, the industry was nationalized under the Cuban Revolution in 1959. The market began to see a major decline in both international and domestic sales. The U.S. embargo dealt a major blow to the industry, cutting off all importing of Cuban coffee to the United States.

Today, Cuban coffee is experiencing a resurgence worldwide. Companies like The Cuba Mountain Coffee  Company are working hard to revitalize the Cuban coffee industry. 100% Cuban coffee is still not available in the United States. Although, you can find versions or blends of Cuban coffee made from beans harvested outside of Cuba. Usually these will be identified as “Cuban Style” coffees.

In the eastern region of Cuba, the Sierra Maestra Mountains are home to some of the finest Arabica coffee beans in the world. The reddish-brown soil is extremely fertile and needs no chemical fertilizers because of the rich humus that’s plentiful in the region. (Humus refers to compost that contributes moisture and nutrients to the soil) The majority of coffee grown for export comes from the Sierra Maestra’s.

While the Sierra Maestra exclusively grows Arabica coffee, the Escambray Mountains in central Cuba produce both Arabica and Robusta. The majority of domestic coffee comes from this mountain range.

Cuban coffee is harvested by hand from the steep hillsides, and carried out by the coffee farmers to be transported by mule to the drying areas. In fact, the mule is a very important part of the local coffee culture and is often provided ‘top-notch’ veterinary care throughout his lifetime of service.

Economic Impact on Cuba If the Embargo is Lifted

In my conversation with Amanda, I asked what the economic impact on Cuba would be, should the embargo be lifted. Her response was a candid one,

First, can Cuba supply the American market in mass? At the moment, I don’t think its possible. Lots of work needs to be done as far as the infrastructure … equipment, new roads, etc. The coffee knowledge is definitely there. Invest in the infrastructure and over the course of five to ten years they could meet the U.S. demand. 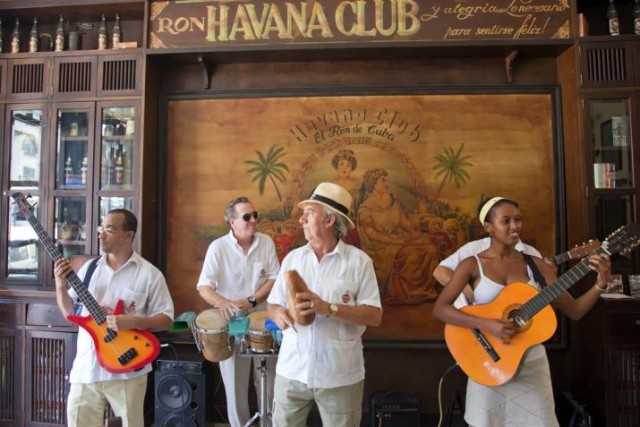 Will Lifting The Embargo Help The Cuban Coffee Farmer?

Should the U.S. embargo be lifted, little would change initially for the working and living conditions of Cuban coffee farmers. The embargo has been a disappointment because the 50 year old policy has failed to reach its goals. There remains great concern for the human rights abuses and repression of the Cuban people. While other Latin American coffee farms take advantage of updated labor and fair trade regulations, Cuban coffee remains a state-owned industry. Pro-embargo experts warn that lifting the embargo will only serve to benefit the government and not private citizens. (See Pro’s & Con’s Of Embargo)

Currently, international coffee companies doing business with Cuba are working to improve the living conditions of the Cuban coffee farmers directly. By investing precisely into the Cuban agricultural sector, the Cuban coffee farmer benefits. Investment dollars go towards new machinery, improved logistics and testing laboratories for coffee production. The hope is that these improvements will benefit the general labor conditions as well.

Anti-embargo enthusiasts believe that the increase of U.S. tourists and businesses in Cuba, will have more of an effect towards accomplishing human rights goals. They point to the economic reforms, access to health care and education, that came to China as a result of open trade by the United States.

If you’ve never tried real Cuban coffee, get ready for a treat. Traditionally, roasted dark and finely ground, Cuban coffee is known for its strong taste. The preparation of choice is espresso, using an espresso machine or moka pot (“la cafetera”). Our friends at Cuba Mountain Coffee shared a few Cuban favorites with us. Enjoy!

Cuban Style – Here in the U.S., you can still experience the Cuban coffee taste with a “Cuban style” coffee. Usually Cuban style is a combination of beans from Costa Rica, Guatemala and Nicaragua, blended together and roasted very dark.

brewing process. Typically, sugar is added to the bottom of the mug and the hot coffee drips onto it, allowing the sugars to break down to produce a uniquely sweet espresso.

Caf’e Cortado – This Spanish espresso is topped with steamed milk and is a favorite in Spain and Latin America. For a true Cuban experience your espresso to milk ratio needs to be 75/20.

Cortadito – Enjoy a genuine Cuban experience! Commonly prepared with a stove top espresso brewer, raw (or dark) sugar is poured into a pre-warmed cup. Coffee is added as it begins to brew, then stirred quickly until it makes a paste. When the paste forms, pour in the rest of the coffee, followed by steamed milk.

Caf’e con Leche ( Coffee with milk) – How about a Cuban espresso with a side of hot or steamed milk! This is the traditional breakfast drink for the Cuban household and is enjoyed with toasted Cuban bread to dunk!

Thanks to these helpful resources:

Special thanks to The Cuba Mountain Coffee Company (Alma de Cuba), for sharing their first-hand experience and knowledge of Cuban coffee!